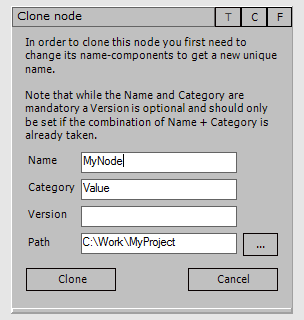 In order to create a dynamic VL plugin doubleclick in a patch to open the nodebrowser. Type "Template" to get a list of templates which you can choose to start from.

Choose one of the templates prefixed with v and press CTRLEnter or CTRL+Click on it to clone it. The two options you have is:

Where stateless means that your plugin does not store a state, ie. it is not saving values for re-use in the next frame. This choice is only offered here to save you some clicks later. You can still change your mind at any time in the VL editor.

In the "Clone Node" dialog that now shows up choose a unique Name and a Category for your node. Specifying a Version is optional, see NodeAndPinNaming.

If the vvvv patch in which you're cloning in is not yet saved you'll also have to specify a path where to clone the VL template to. It is therefore always recommended to save the vvvv patch first because then the clone conveniently goes to a subdirectory "\vl" next to the vvvv patch.

Press Clone to see your plugin appear in the patch. Rightclick the node to open the VL editor. 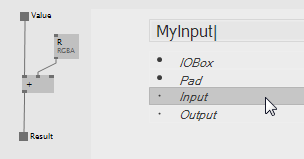 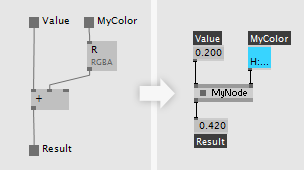 VL editor and the node in vvvv.

There are two ways to create input and output pins in VL:

Initially a pin has no type specified and it will automatically infer its type from the pin it is connected to. This can be convenient but it is also good practice to annotate a pin with a specific type. To do so middleclick a pin to open the TypeBrowser and enter the name of a type. The following is a list of most commonly used types:

For a pin defined like this, VL will always only see a single value, even if a spread is connected in vvvv. See Think slice-wise below. 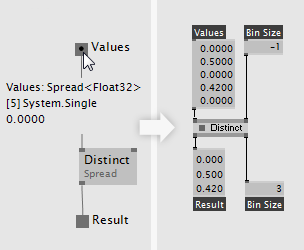 An Input pin specified as Spread

In order to work with a spread of data inside a plugin you need to specify the type of the pin to be of Spread, eg:

For each input pin annotated with Spread a corresponding Bin Size pin is created on the node in vvvv that allows you to specify how its data is structured into bins for vl. VL will always only see one of those bins at a time. See Think slice-wise below.

Note that you may encounter situations where you will rather not want such a Bin Size pin but at the moment there is no way to get rid of them! We have planned this for a later update

The Update operation is the heart of your plugin. It is called every frame. Here you do the main calculation of your plugin. If you're looking for a section to initialize some parts of your code (ie. run them only once), see the next section (Create). 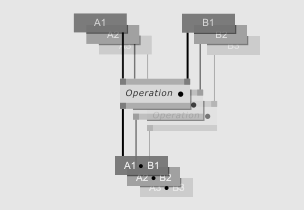 This is important to understand as it is different to when you create patch in vvvv: When patching in VL you only think about a single slice even though the operation may then be executed for multiple slices consecutively, but you don't have to worry about that! 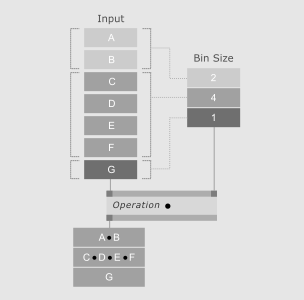 If you annotate the type of an input to be of: Spread

You'll use a constructor if you have parts of your code that only need to run once. Note that a constructor is optional and therefore the template doesn't show its usage. 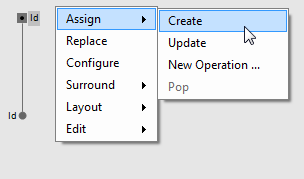 Selecting and assigning a pin to Create.

You can place any nodes, pins or links on the Create operation by selecting them and choosing: Assign -> Create in the right-click context-menu. 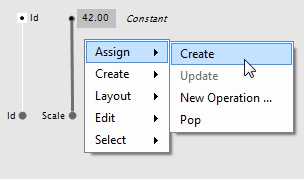 Selecting and assigning a link to Create.

Pads and IOBoxes are always un-assigned in that they don't belong to any single operation but can be connected to/from any operation.

So in order to initialize a Pad with a constant value in the constructor you simply assign the link that goes from IOBox to Pad to Create. 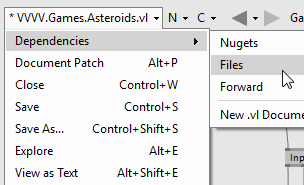 Adding a reference to another VL document.

By default each VL document depends on the VL.CoreLib.vl package, which gives you access to the VL Core library nodes.

You can add dependencies to other packages or VL documents via the document-menu: Dependencies

You'll then have access to all nodes that are defined in the referenced package or document.

Inspecting a value in an IOBox and on a link.

In order to inspect the value of a pin simply hover it with the mouse or start a link from it and then middleclick to create an IOBox that will always show you the pins current value. 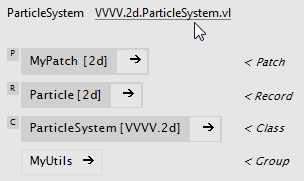 Typically a simple plugin will consist of a single VL document with multiple patches and references only to the default dependencies (like the VL.CoreLib package).

You can get an overview of all elements in your document by viewing the Document Patch which you can always reach via ALTP. It shows you all Classes, Records, Operations and Utility Patches the document holds.

Still from that simple structure you can expose multiple nodes to vvvv. You can have any vl datatype or operation show up as a node in vvvv.

Generic indicator is turned off for this operation.

In order to have a vl operation show up as a node in vvvv it needs to meet two criteria: 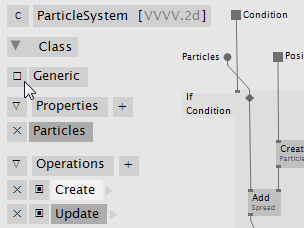 A non-generic class is exposed to vvvv.

In order to have a vl datatype show up as a node in vvvv it needs to meet the following criteria:

To make sure an operation or datatype is non-generic uncheck its Generic indicator. In case all pins already have a type inferred now all is fine, otherwise certain pins may show an error indicating that they need a type annotation.

While in c#-plugins you can define subtypes (eg. min, max, default, stepsize,... for values) for any input or output pin, the only thing you can specify for inputs in vl-plugins is a default (see Defining Pins above).

While in c#-plugins you can create configuration pins (ones that only show up in the inspektor), as of now there is no way to do this with vl-plugins.

While in c#-plugins you can define a spread to show up as Pin Group instead, ie. many side-by-side pins whose count can be set via the Inspektor (see +, Cons, ... nodes) this is not possible yet for pins in vl-plugins.

As with any other effect or plugin, vl-plugins cannot easily be boygrouped. The two options you have is:

note:
More about VL: The Gray Book specifically the chapter: VL for vvvv users for a start.