When talking Projection Mapping you have to essentially distinguish between two different types. Depending on your prerequisites and desired visual effects you'll have to choose between:

If you only need to project flat content onto flat surfaces, ie texturing some real-world flat geometry with some animated wallpaper, go for this simplest of approaches. It is named after the math behind it and essentially allows you to throw an image onto a flat surface from an arbitrary projector-position as if it was thrown on the surface head-on. 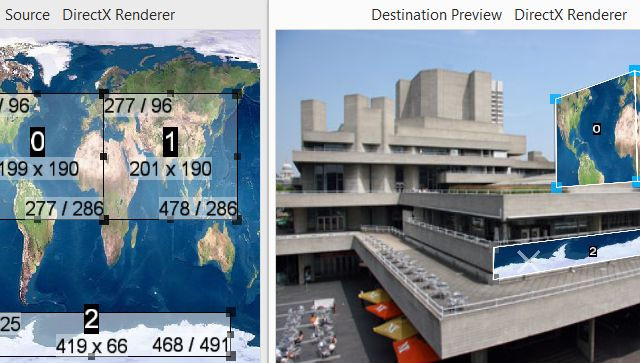 On OSX there is a software called MadMapper that uses this appoach and lets you pipe any flat content through onto arbitrary flat real-world surfaces. In vvvv you have the Homography (Transform) that would be the basis of any such mapping tool. See badMapper for an example that establishes a basic workflow.

If you have a more arbitrary or even curved surface to project onto you need two things:

ad 1) Regarding the virtual copy of the surface you can either:

ad 2) In order to get the projectors lens/position/rotation you have 3 options:

With those two things at hand you can now setup a scene to project a virtual copy of the geometry on its real counterpart. Now any visual effect that plays on the surface of the virtual geometry, like light/shadow/texture animations will seemingly be part of the real-world geometry.

Examples of this approach are Lightstrive and Pablo Valbuena's Augmented Sculpture Series.

For the basic setup of a 360° projection on a cylindrical screen, including soft-edging, see: small 360 degree setup.zip

One very popular thing with projection mappings is 3d-illusion kind of effects like seen in Pablo Valbuena's The Hague City Hall projection or AntiVJ's Nuit Blanche Bruxelles projection. It is to keep in mind though that these effects only work for the audience when they stand in the right spot because when creating the effect a perspective has to be chosen for which the illusion is created.

So here is what you do:
You capture the virtual scene from a position which corresponds to the desired position of the audience. Then from that same position project the captured image onto the virtual geometry. This results in a scene where your desired 3d-effects are now a flat texture on the surface of the virtual geometry. Once you have that you go with the Re-Projection Approach as mentioned above.