There is a series of image processing filters that are based on the idea that from the point of view of one pixel in the image you take its neighbouring pixels (left, top, right, bottom and possibly the diagonal neighbours as well) into account when deciding on the color of the current pixel.

Given a textures original size (WIDTH/HEIGHT) you can compute the distance between two pixels in texture space units. The math is simple: If texture coordinate 0 specifies pixel 0 and texture coordinate 1 specifies pixel WIDTH the distance from one pixels coordinate to its horizontal neighbours can be expressed as 1 / WIDTH. So while in pixel units a pixels size is of course 1x1 in texture space units a pixels size can be thought of as:

Using pixelSize.xy you can then access neighbouring pixels by adding/subtracting that value to/from a pixels coordinate. You best do this calculation in the patch and hand the result over to the pixelshader via a

A simple example of an application is an edge detection filter where for every pixel we take its left and right neighbours, computing their difference and check if the results absolut value is greater than a given threshold. If it is, the pixel is colored white, else black.

There are two things to point out in the above code:

To improve the edge detection we have to do it in both directions. So in addition to the left and right pixels we also have to sample the upper and lower pixels:

and then we have to take those into account together with the left and right pixels when deciding about the return color: 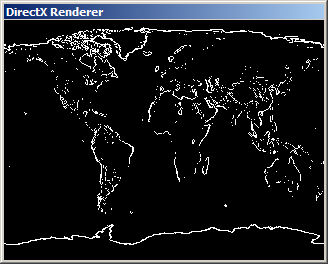 Also a blur can be realized this way. The better the blur is supposed to be, the more neighbouring pixels it has to take into account. Since the number of texture samples per pixel are limited to 16 a good blur is best achieved by doing it in two passes. First horizontally, then take the resulting image and do the blur again in vertical direction. So for now lets concentrate on a horizontal blur. 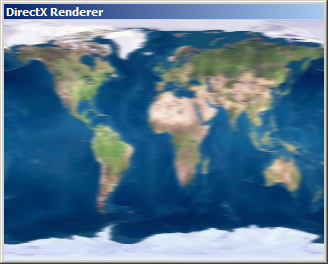 The idea is to sample a range of neighbouring pixels and add up their colors while weighing their influence corresponding to their distance from the current pixel. The current pixel gets the most weight, while the 2 left- and rightmost pixels are taken into account only with a smaller weight. The result then has to be normalized back to the range of 0..1 by dividing through the sum of all weights.

To realize a vertical version of this pixelshader you'd now duplicate the PS() function, name it PSVerticalBlur() and change the code so that it computes a vertical blur, like so:

Now that you have two pixelshader functions in the effect you also need two techniques:

Like this you can use the two techniques alternatively but as mentioned before a better quality blur would be achieved if you'd apply the result of the first (horizontal) blur-pass as input to the second (vertical) pass... More on multipass effects comes after the next chapter.

Those were the basics of pixel-neighbour based image processing. But there is actually a whole range of similar effects which are commonly referred to as convolution/kernel filters. With things learned so far you should be able to progress in this direction on your own. See here and there for details and examples.