Spread - A one dimensional list (array) of data
Slice - One element of a spread
Bin - A virtual subset of consecutive slices in a spread
NIL - A spread of 0 slices, depicted as Ø

Slice Count - Number of slices in a spread
Spread Count - Synonym to Slice Count
Bin Size - A number that specifies how many consecutive slices of a spread together form a bin
Index - A number referencing a slice via its position in a spread. Counting from 0.

Not to be confused with:

As a rule of thumb: If any of a nodes inputs contains nil, its output also returns nil. Rendernodes like the Quad (EX9) with a nil input are not drawn.

A Bin Size always refers to an other input on the same node and provides information as to how that other inputs spread is structured.

For nodes that have a Bin Size and an Index note that the Index refers to bins rather than the individual slices!

If you want to provide a Bin Size as an input to your own subpatch/module make sure to use one of the NormalizeBinSize (Value) convenience nodes which turns any given binsize (positve/negative) into a spread of positive binsizes for easier handling. 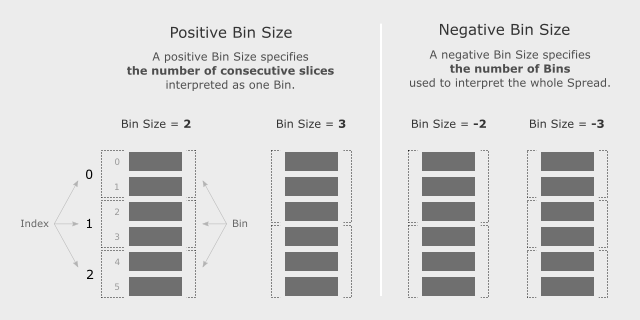 Note that you can also specify a spread of positive (not negative!) BinSizes which essentially means that you can have a "spread of spreads" where each "inner" spread can have a different count.